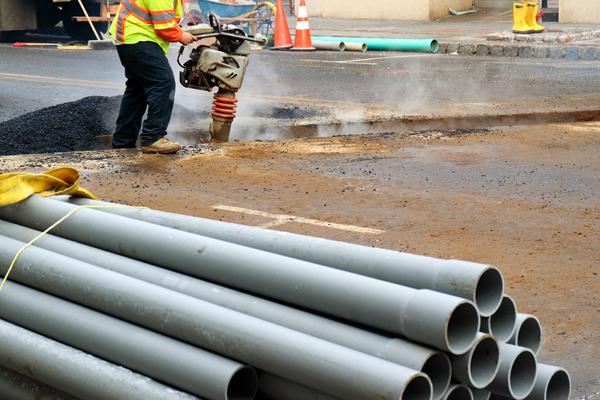 America is one of the wealthiest countries on the planet. Because of that, many would expect high-quality infrastructure throughout the nation. Unfortunately our infrastructure is aging, causing serious issues that could rack up big costs.

In 2013, the American Society of Civil Engineers (ASCE) gave America’s drinking water infrastructure a D grade. The next ASCE Report Card for America’s Infrastructure is coming this year, and utilities like San Jose Water (SJW) are looking to bring that grade up.

Pipes and mains are often left uninspected until something goes wrong, which then requires costly unscheduled repair work. As organizations scramble to return water service to affected areas, traffic can become difficult to direct, causing long delays and hampering commerce. If you’re late to work because of a water main break, lack of support for water infrastructure repairs might be to blame.

While the corroded pipes and presence of lead in the water supply in Flint, Mich., are far from average in the United States, lack of oversight and investment have put our national water infrastructure at risk. However, not every single pipe needs replacing. In fact, the American Water Works Association (AWWA) estimates that replacing all 1 million miles of pipes in America at once would cost about $2.1 trillion. That’s a steep price, especially if it were to be paid all at once. Fortunately, there is a better way.

If the United States were to implement a program to determine pipe condition via cost-effective structural assessments that would allow the worst-condition pipes to be addressed first. This would help avoid potential failures and their associated risks, damages and costs. It would also prevent the needless replacement of newer, functioning pipes that would occur under the $2.1 trillion total-rip-and-replace plan.

This type of more holistic approach would spread the cost of repairing the infrastructure over the course of years, in addition to driving down the overall cost entirely. AWWA estimates such an approach would cost closer to $1 trillion — spread over 25 years. Just because the cost can be spread out over future years doesn’t mean we can wait to get started. According to AWWA, delaying action “can result in degrading water service, increasing water service disruptions and increasing expenditures for emergency repairs,” and “the more we delay, the harder the job will be when the day of reckoning comes.”

For these reasons, money needs to be put toward revitalizing the water infrastructure now. SJW is taking up this fight, having received permission from the California Public Utilities Commission (CPUC) to increase water rates to pay for much-needed upgrades to the company’s four-decades-old Montevina Water Treatment Plant. The Montevina Plant produces an average of 10% of the total supply for Silicon Valley’s largest water retailer, which makes it a key area of focus. In addition to upgrading the Montevina facility, SJW is working hard to make sure the mains that bring water to you are in tip-top shape, having replaced 25 miles of water mains in 2015-16.

Each of these federal measures could help in its own way. In the meantime, though, SJW has been able to start at the local level by marginally increasing water utility prices. While no one likes to pay more for their water, extra fractions of a penny per gallon are going a long way to helping create lasting infrastructure that helps ensure safe and sustainable water now and in the future. So, on behalf of SJW, your neighbors, and future residents, thank you!