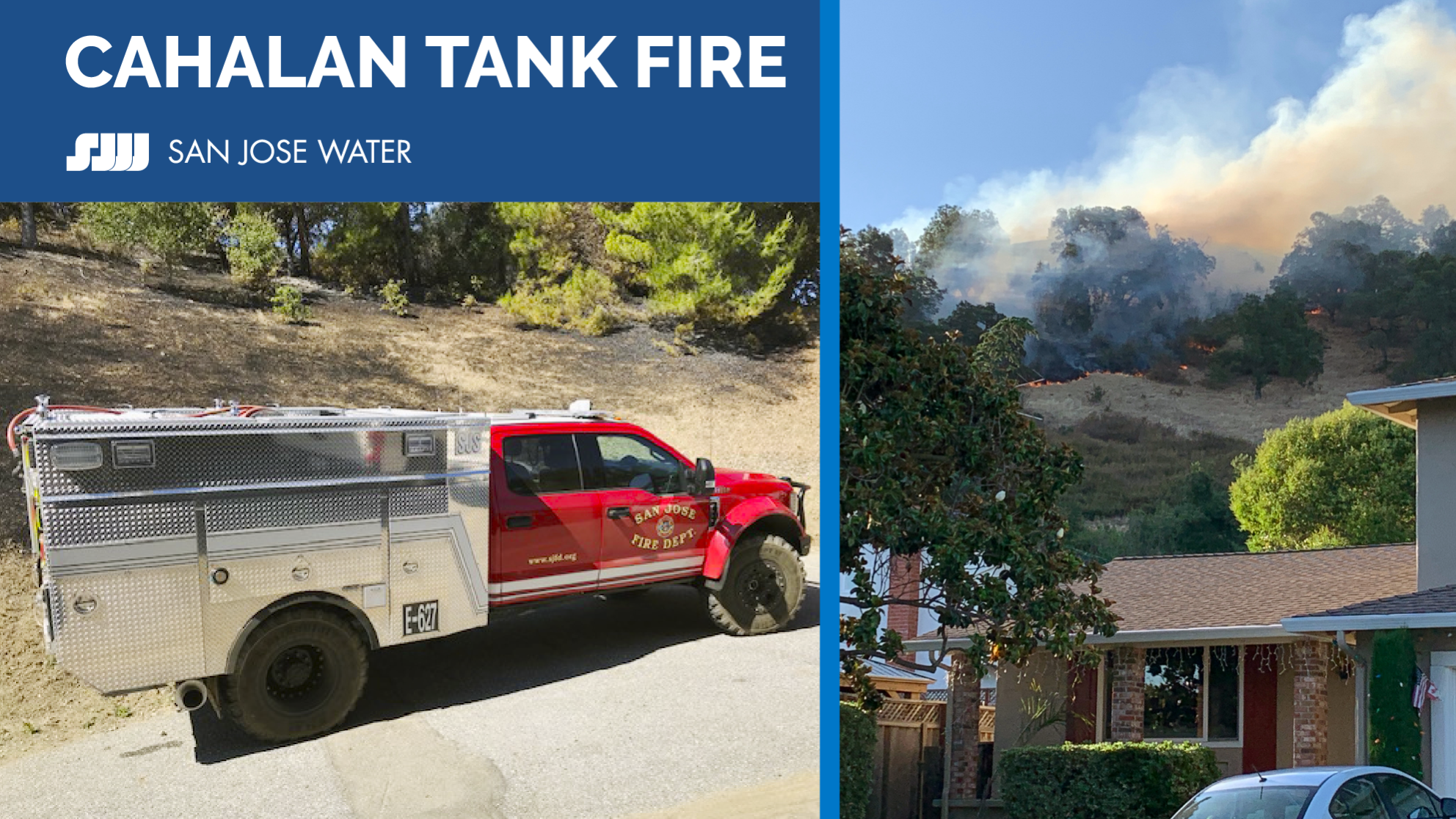 A fire in the Santa Teresa foothills of San Jose scorched 90 acres on Thursday, June 4, 2020. Not only were nearby residents evacuated and air tankers called in to drop retardant, but SJW Operations staff also jumped into action. Our Cahalan tank was right in the middle of the fire area.

Around 5 PM on Thursday, Operations Supervisor Richard Tapia was notified by our Crewleader, Ed Heldebrant, that our tank was on fire. Looking up, Heldebrant could see a huge plume of smoke and started receiving calls from friends,SJW Dispatch, and Fire Dispatch. Our East Side Operator, Tim Mangrum, investigated the site and confirmed the dangerous situation. The fire was raging along the front and back hillsides where our tanks are located. In fact, the Cahalan tank was completely surrounded by flames.

As winds began to pick up, Mangrum reached out to the Fire Battalion Chief. The area was abuzz with action: four helicopters, DC10s dropping water, bulldozers moving land, and firefighters laying out hoses, connecting their trucks to hydrants. With limited time to speak to the Chief, Mangrum opened a line of communication.

Cayetano Avila was the graveyard shift operator monitoring our facilities and communicating with the Fire Chief, which included sharing the location of our sites. Ultimately, our nearby facilities were used as a staging center for fire protection efforts. By 2:00 AM Friday, we received word that our stations were clear to check out (other than Cahalan) and the fire was 70% contained.

Once given the safety OK, operators physically drove to our facilities to monitor any threat of fire damage. Our SCADA (Supervisory Control and Data Acquisition) system monitored tank levels for heavy demand and pressure in the affected zones. Cahalan Reservoir, Vista De Almaden Station, and Graystone Heights Station are all in the area and were of special concern. Also in the area is our one source of imported water—Valley Water’s Santa Teresa Water Treatment Plant (STWTP). Valley Water’s staff reassured us that STWTP was not in danger. Great news—not a single customer’s source of water was affected!

As in all fast-moving situations, contingency plans were made. PG&E was on the scene closely monitoring nearby transmission lines. Planning for the worst, we quickly made sure portable pumps and generators were at the ready to move water to four separate locations, if needed. Ensuring firefighters had an adequate supply of water to fight the fire was our priority. Public safety is always #1.

Following the event, SJW debriefed to discuss any issues or observations that could help guide future actions. For this fire, we had been concerned that fire retardant had been used and may have hit our tank, which could lead to a potential water quality issue. Luckily, the Cahalan tank was clear.

We were proud to see a seamless communications channel between all agencies and internally. Nothing was missed between shifts or between agencies. All in all, a successful response to a fire emergency that could have resulted in disaster.